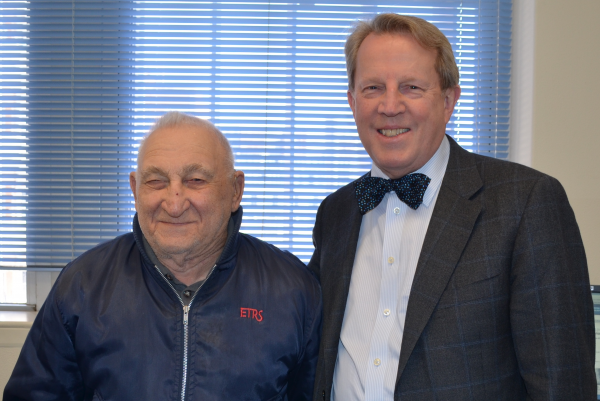 It is ten years since The Alfred became the first hospital in Australia to replace a patient’s heart valve without the need for open heart surgery.

Treatment was traditionally based on surgery that required replacement of the diseased valve with a mechanical or tissue surgical prosthesis.

The impact of surgery was such that a high portion of patients likely to benefit were unable to undergo the procedure due to their age or other co-morbidities.

Once a patient becomes symptomatic the disease process can result in death within 2-3 years if untreated.

It was first performed by Professor Alain Cribier in France in 2002. Since then over 270,000 patients in 70 countries have been treated, over 3,000 of those in Australia and New Zealand.

Yevgeniy Krepkyy was one of the first patients to undergo the procedure at The Alfred.

He recently celebrated his 96th birthday and 10-year check-up with Professor Stephen Duffy, head of Cardiology General Services at The Alfred.

As part of the TAVI procedure, a biological tissue valve mounted on a metal frame is inserted on a catheter that is guided to the heart through a major artery, often the femoral artery starting at the groin. TAVI can be a better choice for high-risk patients because it is considered minimally invasive compared to open-heart surgery.

“TAVI has been a significant advancement for patient care. Previously, patients considered high-risk for surgical aortic valve replacement, because of other health conditions or age, would often be turned down for surgery,” said Professor Stephen Duffy. “Now they have another option.”

The vast majority of patients receiving TAVI do not need a general anaesthetic or time in an intensive care unit. Their hospital stay can be just 2-3 days.

Professor Duffy said large studies comparing TAVI with surgical aortic valve replacement have demonstrated its superiority to surgery in high-risk patients and recovery is much quicker.

“We are considered a centre of excellence for TAVI and with our aging population, demand is only going to increase for the service.  A/Prof Tony Walton, Dr Dion Stub, Dr Nay Htun and I look forward to treating many more patients, like Mr Krepkyy, into the future.”

Photo and quotes courtesy of The Alfred.