Growth in spending on rebate lags Medicare and public hospitals

Spending on the private health insurance rebate has moderated with growth now far exceeded by growth in spending on Medicare and public hospitals.

An analysis of key areas of federal health spending - PHI rebate, Medicare, public hospitals and the PBS - shows growth in spending since 2010-11, and to the end of this decade, will heavily favour Medicare and public hospitals.

Much of that growth occurred in the early years of this decade before a series of reforms impacted its contribution to private health insurance premiums.

The reforms have included means testing, changes in indexation and its removal from Lifetime Health Cover loading, meaning what was once a 30 per cent government contribution to premiums is now a maximum of around 26 per cent.

The result has been an ongoing annual reduction in its value and emerging affordability issues for Australians with private health insurance.

Total spending on the rebate is expected to rise by less than 15 per cent between now and 2020-21. Although this is before the impact of further recent downward revisions in spending on the program are released in next May's 2018-19 Budget.

A recent study commissioned by Private Healthcare Australia and conducted by social policy research firm, Evaluate, found government spending on the rebate is economically efficient, both in terms of direct economic costs and overall welfare gains.

The study found private health insurance makes a lower call on the public purse because of user-funded premiums - the rebate essentially leverages a significant additional consumer contribution. In addition, it redirects patients away from the public system, reducing demand and overall waiting times, while ensuring people receive treatment earlier.

Spending on the PBS appears to be the poor cousin when it comes to federal health spending.

While overall spending on the scheme has risen by 35.9 per cent since 2010-11, rebates paid by companies under deeds of agreement with government mean that growth has been almost entirely repaid. Companies paid rebates of $3.27 billion in 2016-17, meaning net spending on the PBS in that year was virtually the same level it was in 2010-11. It is expected to barely grow between now and 2020-21. 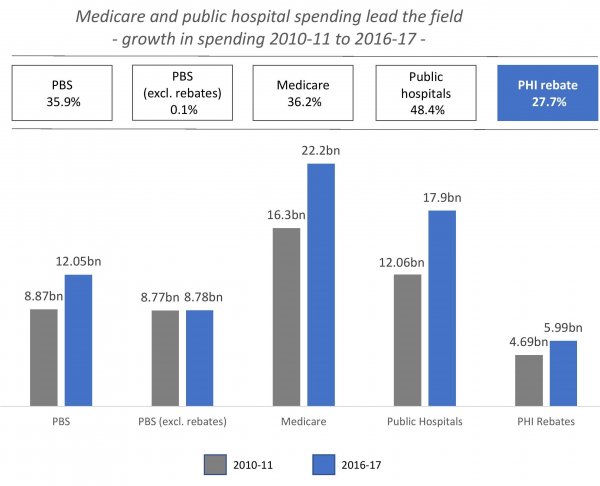