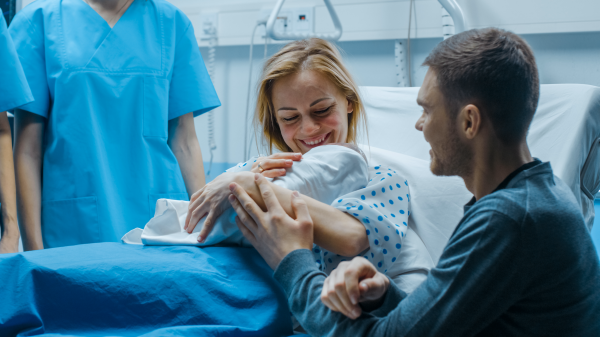 Labor has announced that if elected it will launch a $38 million expansion of Australia's newborn screening programs in a move that will effectively see the national take over the current 'postcode lottery' for babies.

Leader Anthony Albanese announced an elected Labor government will essentially look to align Australia's national newborn screening program to those in other countries by increasing the number of diseases included to around 80.

Australia's patchwork of newborn programs currently screen for around 25 diseases. California's program screens for 80 diseases, for which 76 have treatments.

Australia's current programs are administered by individual states and territories. Very few diseases have been added to these programs in recent decades.

The current Coalition federal government did announce changes to the process for evaluating the addition of new diseases for newborn screening.

The complex and lengthy new process includes bureaucratic review, consideration by the Commonwealth chief medical officer and a full health technology assessment (HTA) by the Medical Services Advisory Committee (MSAC). Even then, the inclusion of any disease is a matter for individual states and territories.

The Department of Health engaged a consulting firm to promote the new process to stakeholder groups.

No new disease has been added to any state or territory program as a result of this process.

The failure to add disease to programs is having a direct impact on patients by undermining the implementation of reimbursement outcomes and access to treatment and care.

Health minister Greg Hunt recently announced the reimbursement of Novartis' ZOLGENSMA gene therapy for the presymptomatic treatment of spinal muscular atrophy (SMA). However, only New South Wales and the ACT currently screen for SMA, meaning babies can only be diagnosed pre-symptomatically depending on where they live.

Better Access Australia has pushed for a national takeover akin to the National Immunisation Program.

The organisation's chair, Felicity McNeill PSM, told BioPharmaDispatch the welcome announcement will address the current situation under which five babies are born in Australia every day who will not be diagnosed with degenerative genetic conditions.

“821 babies will be born today. Five families will go home thinking the heel prick test their baby received protected them, only to be told months to years later that their child is suffering from a degenerative and life-threatening condition," she said.

“With only NSW and ACT screening for SMA, the 200,000 babies born anywhere else in Australia will miss out on early diagnosis and treatment. When the time to diagnosis matters both for ensuring the best response to treatment, and in some instances qualifying for access to treatment, the risk of no access to this ‘life-saving and life-changing treatment is, unfortunately, going to be the reality for most babies born in Australia with SMA.

“And unfortunately, this story is not unique to SMA with dozens of other lifesaving treatments available to treat many diseases available in Australia today but not included in newborn screening,” said Ms McNeill.

“Recent national polling shows the Australian community knows that the current state of newborn screening in Australia for rare diseases is simply not good enough and it’s time to fix this – whatever it costs.

“In the recent Kore poll of 1258 Australians, 84 per cent of respondents agreed that Australia should screen newborn babies for more diseases,” added Ms McNeill.