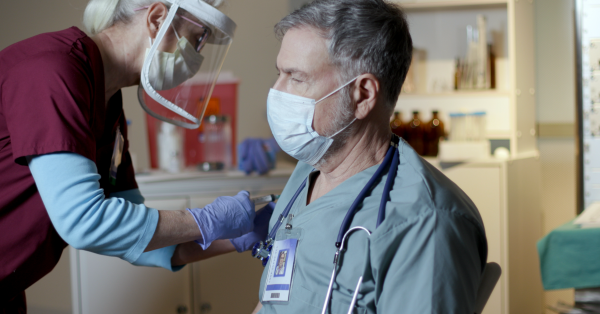 Day 121 of Australia's COVID-19 national immunisation program and an updated analysis shows the speed of its rollout is not accelerating at the same rate as comparable countries in the region.

Australia has administered just over 6.5 million doses in the first 121 days of its program that is currently using the mRNA vaccine developed by Pfizer and its partner BioNTech (Pfizer-BioNTech) as well as the adenovirus viral vector vaccine developed by AstraZeneca and The University of Oxford (AZ-Oxford). The AZ-Oxford vaccine is being produced by CSL at its facilities in Melbourne. The Australian government also has agreements for the vaccines developed by Novavax and Moderna.

The updated analysis based on information collated and published daily by Our World in Data shows Australia has administered the first dose to 21.7 per cent of its population and fully vaccinated 3.1 per cent.

Late last week, the rollout suffered another setback. The government accepted advice from the Australian Technical Advisory Group on Immunisation to further limit the AZ-Oxford vaccine to people aged 60 and over.

Australia's program, which was officially launched on 21 February, started several months behind the UK (8 December), the US (14 December), Israel (18 December), the 27 member states of the European Union (26 December) and Canada (6 January).

As a consequence and in terms of absolute timing, Australia's program will almost always be behind those in these countries. 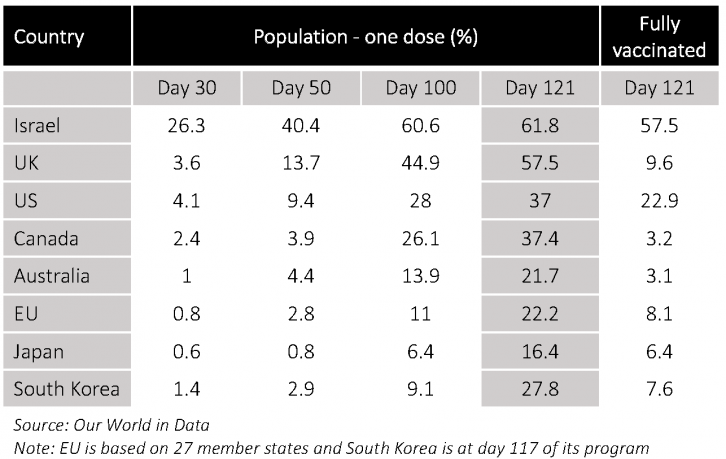 Australia's program was launched at around the same time as those in Japan (17 February) and South Korea (25 February).

The performance of Australia's rollout at each of these points has been indexed to the group of comparable countries based on a standardise start date.

It reveals some variability. This could be based on different approaches to administering the vaccines.

Australia's rollout of first doses at day 121 remains significantly behind Israel, the UK, the US and Canada. It has accelerated compared to these countries but this could be explained as a 'catch-up'.

More worrying for Australia is that programs in the European Union (EU), Japan and South Korea are now accelerating at a much faster rate.

The programs in the EU and South Korea have now moved ahead of that in Australia. South Korea's program has accelerated at a remarkable rate in the past three weeks. It has gone from well behind Australia's program to now be comfortably ahead. The program in Japan has also accelerated in the past three weeks and it appears destined to move ahead of Australia's in the next few weeks.